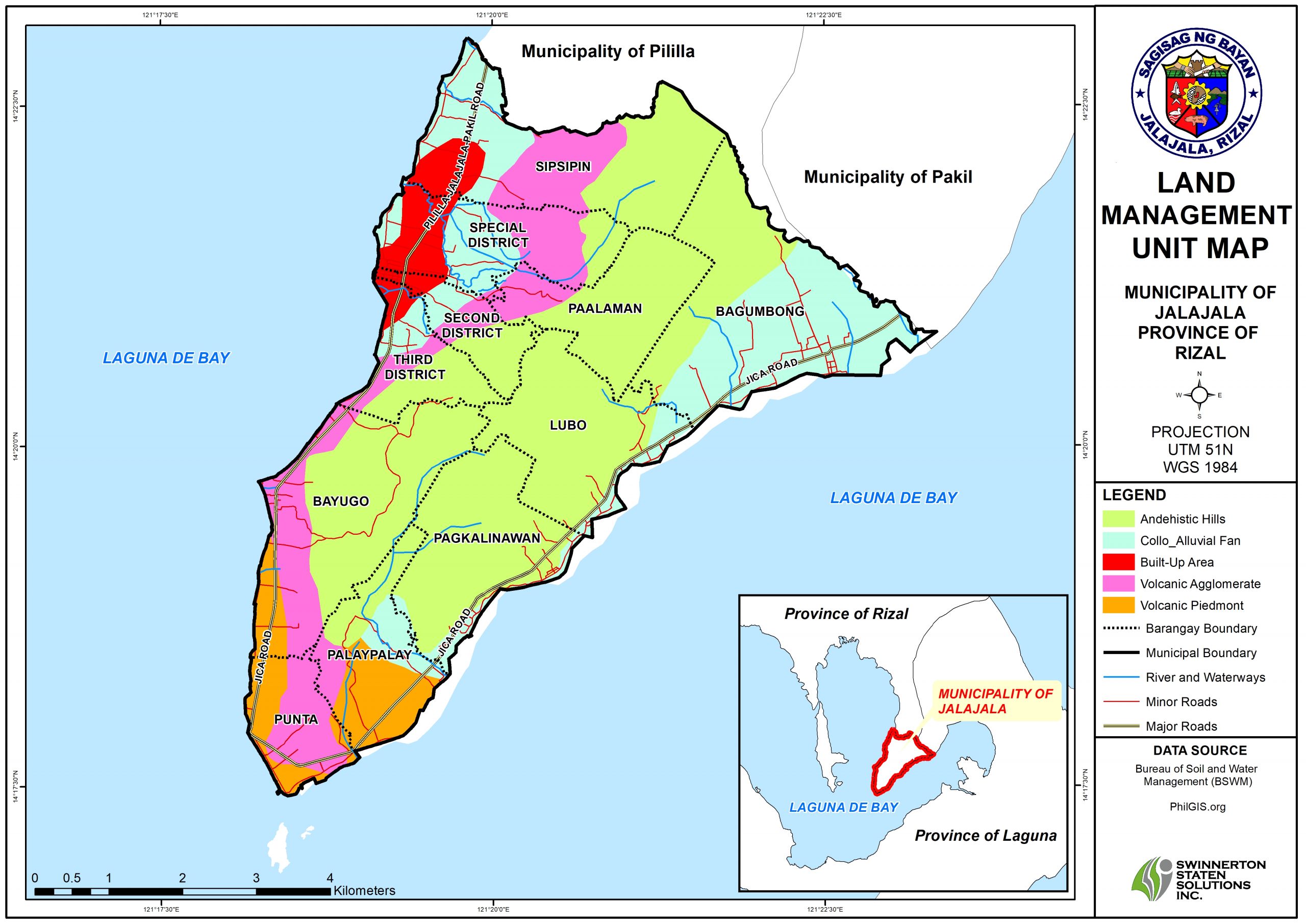 The minor alluvial plain is a fan-shaped alluvial plain that is formed when rivers and streams leave behind some sediments from mountains and hills into the lowland. These consist of clay, silt, sand, gravel and cobbles. This formation produces a moderate to very deep soil and is planted mostly to palay and in some places, vegetables and fruit trees. Shrubs and grasses also cover a large portion of this landform. This landform covers about 1,776.04 hectares or 36.03% of the land area.

The footslopes or piedmont covers an area of 362.84 hectares or 7.36% of the municipal land area. These are gently sloping lands formed by gradual deposition of materials at the foot of a hill or mountain. The soils of this form are derived from volcanic materials, underlined weathered rock fragments that are course loamy to clay. This landform is also usually planted to paddy rice and fruit trees.

The hills are sub-divided into two (2) classes: the andesitic hills with high relief and the volcanic agglomerate hills with low relief covering an area of 2,112.84 hectares or 42.86% and 481.24 hectares or 9.76% of municipal total, respectively.

Generally sharp crested ridges due to the rock’s relative susceptibility to weathering and erosion characterize the andesitic hill landform.  The rock that forms these hills are medium to fine in texture and greenish gray to gray in coloration. The mineral assemblage consists of biotite, hornblende and feldspar with minor quartz.  The volcanic agglomerate hills, on the other hand, are formed by the accumulation of volcanic aggregates of angular to sub-rounded fragments of andesite, with the latter predominating, and cemented in a tuffaceous matrix of the same composition.  Some of the fragments are observed to exhibit twisted forms indicating that they were ejected in a liquid state. Also, they are often vesicular particularly in their outer layer. 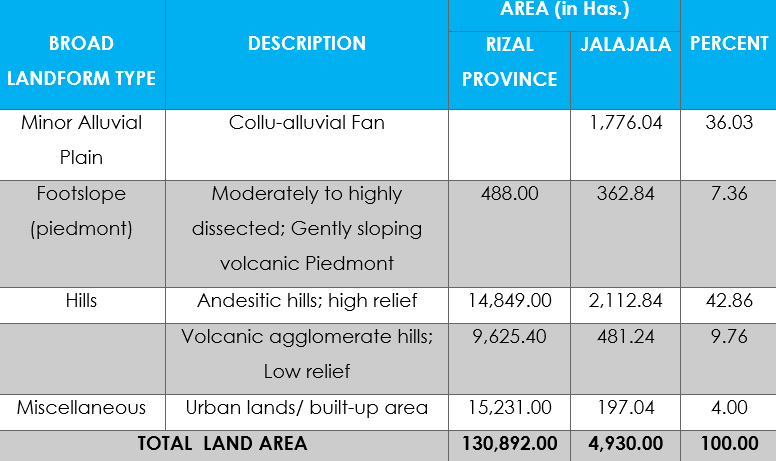 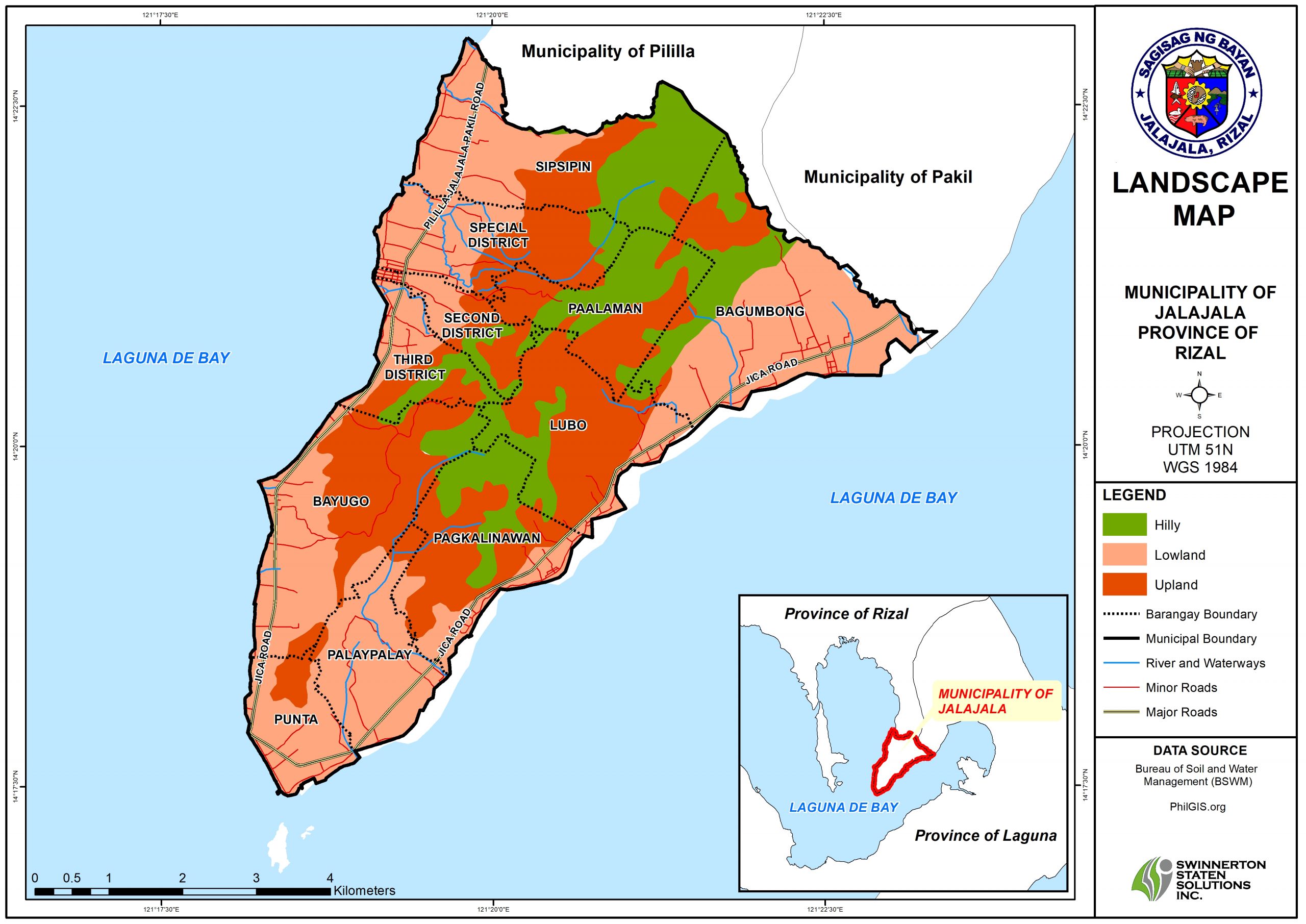 The miscellaneous landform includes creek escarpment, quarry and lake. It also includes the urban or built-up areas, which for Jalajala covers 197.04 hectares or 4.00% of municipal total.